CertaPro: Kids Comfort For Cancer Event Honors the Legacy of a Friend to Many

Traci DiStefano was a force of nature. A friend to many, her smile would light up a room. Wherever Traci went, fun and laughter followed. Traci was known for her contagiously positive spirit, love of life and was described by many as a true “wonder woman.” She had an expansive group of friends, many of whom she had known most of her life, who ranged from peers her own age to the children of her friends.

When Traci was diagnosed with ovarian cancer, her network of friends and family — “Traci’s Tribe” as she called them – rallied around her to help. She approached her treatments with optimism and her characteristic ability to see the beauty in life, even during the toughest times.

When Traci tragically lost her battle in 2019, she left a huge void in the lives of those who knew and loved her. Traci’s Tribe wanted honor her memory in a way that would be meaningful to her. Because of the excellent care Traci received at the Fox Chase Cancer Center in Philadelphia, the Tribe decided to host a fundraiser to benefit the cancer center. The Kids Comfort for Cancer event would be a way to thank them for caring for Traci, and also to help others facing treatment. 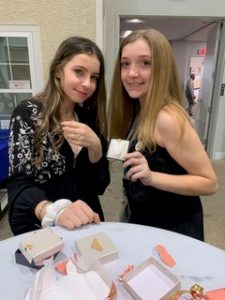 A committee of eight was formed to begin making plans for their inaugural event. What made this committee unique is that it was comprised of four adults and four young teens, who shared equally in the responsibility for making sure all details were covered. The event co-chair was 14 year-old Casey Stone, daughter of CertaPro CEO Mike Stone.

Traci was one of Casey’s mother Kim’s dearest friends, and Traci was like an aunt to Casey. Although Casey has always demonstrated a caring for others, having held fundraisers for various causes for more than half her life, this event was even more special. Casey wanted to honor her friend’s legacy in the best possible way, creating an event that brought families together to celebrate Traci’s life and inspiring other kids to get involved in meaningful causes.

A family friendly event with activities for all ages

The event was held on the anniversary of Traci’s passing, at CertaPro’s new corporate headquarters in Audubon, PA. To keep with the family-friendly theme, event organizers planned a wide range of interactive activities such as corn hole, balloon art, a kids’ arts and crafts area, photo booth, ping pong, face painting and much more.

The committee garnered financial support from many local business

Leading up to the event, committee members hand made bracelets and colorful cancer awareness ribbons and assembled baskets to sell at the event. Attendees got to choose which cancer they wanted to represent at the event, making it even more meaningful to those whose lives have been touched by cancer. The committee also worked with local retailers, restaurants and service providers to donate items to be used for the raffle and silent auction. Cav’s Philly Tailgates generously donated all food and service staff for the event.

Special event speakers included an oncologist from Fox Chase and two cancer survivors whose shared their personal experiences. The committee set a fundraising goal of $15K, and when all was said and done, the event raised more than $50K. In addition to promoting the event on the Social Purpose event calendar, Casey was invited by local media to appear on news shows to raise awareness of the event, which she did with poise and grace.

When we spoke to Casey, she shared details of the important life skills she acquired through this process – time management, prioritization, agenda creation, goal setting, communication, public speaking and teamwork. She even deployed a post-survey to event attendees to determine what they liked best about the event and if there were any suggestions for the future.

When asked about her favorite memory of Traci, Casey shared a special moment. The Christmas Eve before Traci’s passing, Casey and her friends organized a group of 25 carolers for a surprise visit to Traci’s house where they sang some of her favorite carols. She was shocked and happy to see them, and overwhelmed by their kindness. It was another cherished memory of Traci that will live in their hearts forever.

Finding your Social Purpose can happen at any age, and getting kids involved is a great way to set them on a path of charitable service to others.