TLS: Building teams and giving back to local food bank

Earlier this spring, TLS sought to achieve a number of seemingly disparate objectives with a single initiative: Whew! That sounds like a tall order. With those goals in mind, the team brainstormed ways they could accomplish this outwardly daunting task. Soon an idea evolved:  TLS would a launch month-long food drive for the London Food Bank and invite local franchise owners and corporate staff to participate in the collection and delivery of food, which would be live-streamed on social media.  The event would culminate with a celebratory potluck lunch to welcome new MomentMakers and immerse them into the company’s philanthropic culture. TLS set a goal to fill 40 boxes with food and, as a team, deliver them to the London Food Bank. To achieve its objective of collaborating with sister companies and to garner additional donations, TLS invited local franchise owners and corporate staff from Paul Davis Restoration, CertaPro Painters, CollegePro and Pillar To Post to participate, providing them with posters and event details to share with their own employees and customers. TLS utilized numerous channels to create and sustain awareness of the event: TLS is mindful not to over-burden MomentMakers with too many requests for donations, so it implemented fun days where employees would get something in return for donations, with the company committing to matching all employee donations. For example, one Friday in April was designated “Bring on Summer Day” where employees who brought in a donation were able to wear summer clothes and were served ice cream at their desks. TLS also held a “PJ & Hat Day” where, you guessed it, a donation allowed you to wear your pajamas and/or a hat to work.

Celebration and delivery day to the London Food Bank 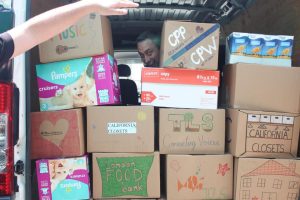 More than 2,166 pounds of food were delivered to the Food Bank, feeding hundreds of needy community members

On May 4, participants gathered at the TLS office where they were presented with an awe-inspiring display – the 2,166 pounds of food that was collected was packaged in boxes decorated with the participating companies’ logos. The TLS team, joined by local Franchisees and their staffs, along with Scott Patterson, Deanna Ouzounis and Roger Thompson from FirstService Corporation, enjoyed a celebratory potluck lunch with dishes prepared by the MomentMakers themselves. Then it was time to get to work! Forming an assembly line, all dressed in matching shirts to create team unity, participants from all brands worked together loading boxes of food onto trucks and then unloading them at the food bank. While there, volunteers saw families picking up food donations which reinforced to many the impact of their project. TLS achieved its goal of increasing brand awareness through social media by having its social media partner on-site taking photos, videos and streaming live on Facebook and Instagram throughout the day.  An added bonus:  Local CTV News was on-site at the Food Bank and aired a segment on its evening newscasts. The team exceeded its target of 40 boxes of food, donating 70-plus boxes and more than $180 in cash to the London Food Bank. “London Food Bank relies heavily on support from caring community members who share our commitment to helping those in need,” said Donna Speller, human resources manager at London Food Bank. “We are grateful for the support from TLS. Thanks to their hard work, hundreds of deserving individuals received food.”   We asked TLS CEO Laurie Dietz what made this event such a success and she emphasized the importance of setting clear and attainable goals coupled with participation, executive support and involvement from local franchises, TLS and FirstService.  Having progress thermometers and boxes of donated food where people could see them were constant reminders of the importance of the program. In a post-event survey, 100% of respondents called the food drive a success, with 61% citing the event as “extremely successful” and 39% calling it “quite successful.” We’d have to agree! 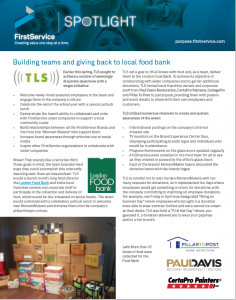